Bookmaker Paddy Power is no stranger to controversy. In the first half of 2012 alone, the Advertising Standards Authority (ASA) received complaints regarding 52 separate Paddy Power adverts, and a total of 552. With revenue at an all-time high, it seems an appropriate time to question whether the brand is simply ‘having a bit of fun’ or rapidly becoming a ‘tasteless troublemaker’?

The concept of ‘mischief marketing’ is very much the guiding philosophy behind the brand’s marketing strategy, to the extent of renaming the role of ‘media and PR manager’, to ‘head of mischief’. Whilst the brand insists mischief is about “being funny and irrelevant, not offensive” many argue that some advertising stunts are made in poor taste, such as the 2010 television advert which featured a visually impaired footballer kicking a cat.

So, why do Paddy Power risk the wrath of consumers and a media backlash with such controversial campaigns? It’s simple. Cost.

Developing controversial content with a view to the publicity that a penalty would generate is commonly deployed to minimise budget, whilst maximising consumer attention. Fearless in their approach, Paddy Power haven’t been afraid to take on the big boys – including football governing body, UEFA, and London 2012 Olympic organisers, LOCOG.

During the Euro 2012 football championships, it is reported that UEFA charged each of the ten official global sponsors around £100 million – a figure somewhat out of Paddy Power’s marketing budget. Nonetheless, when Denmark striker Nicklas Bendtner scored against Portugal in their Group B fixture, he happened to unveil a pair of Paddy Power ‘lucky pants’ whilst lifting his shirt in celebration. When Bendtner was charged with improper conduct, Paddy Power kindly offered to cover the £80,000 fine – a small price to pay for their 1250% saving on official sponsorship.

Even more controversially, however, was the Irish bookmaker’s antics in the lead up to the London 2012 Olympics. With stories beginning to emerge that LOCOG were tackling any attempts of ambush marketing (non-sponsors creating an association with the Olympics without paying for the privilege) to the extent of advising spectators to wear “comfortable, unbranded or Adidas shoes”, Paddy Power were silently acquiring advertising space at three of London’s biggest train stations.

These cheeky adverts proclaimed Paddy Power as the “Official sponsor of the largest athletics event in London this year! There you go, we said it” – before going on to reveal that the sponsorship is of an egg-and-spoon race to be held in the town of London, in France! Despite initially trying to get the billboards removed, LOCOG backed down after receiving threats of court action from the bookmaker – generating substantial media coverage. 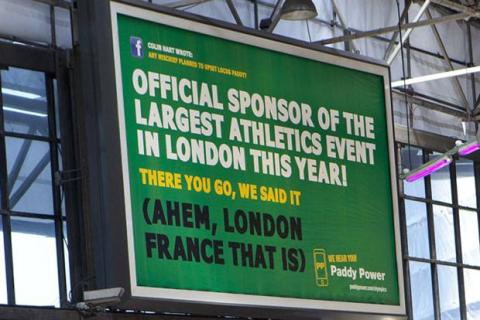 With such extortionate cost savings made by Paddy Power, it is difficult to put together a counterbalancing argument against the deployment of mischief marketing, particularly in the highly-competitive, oligopolistic sports betting market – where the top five players each hold an 11-15% share.

One undeniable downside of the strategy, however, is the lack of exposure to genuine marketing talent. Unbeknown to most, Paddy Power picked up the award for best ‘brand activation’ campaign at The Marketing Society Awards for Excellence 2013. The winning ‘We hear you’ campaign led to a 50% growth in customer acquisition and 29% increase in net revenue. With success like this, does Paddy Power really need the hassle that its controversial antics bring?

Whatever your take on the necessity and appropriateness of Paddy Power’s mischief marketing strategy, chief executive Patrick Kennedy recently revealed that there are no plans to stop any time soon – so you can be sure that the controversy, and this debate, will continue.